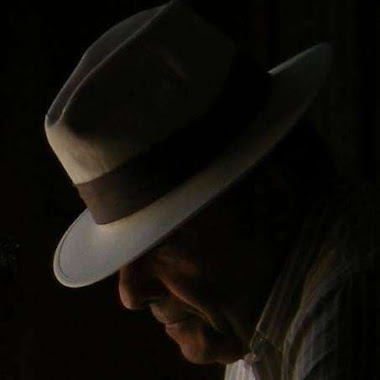 I was born in Cyprus in July 1947, one half of twins; with an elder and younger sister, we were brought over to London around 1956. I made my debut as an entertainer in Cyprus when I was about seven years old. Local kids and people would entice me with fruit and bread to act the clown and make them laugh, it was either that or they thought I was hungry.

My first purchase using savings derived through meagre pocket money - a paper round and helping the lady next door with her housework - was a reel-to-reel Grundig tape recorder and that was on hire purchase terms. I was ten years old and greatly influenced by Elvis Presley. I even belonged to his official fan club in the U.K. When it came to Mod's and Rockers. I was definitely a Rocker. I loved all kinds of Rock 'n' Roll, Chuck Berry, Bill Hayley, Jerry Lee Lewis, but Elvis was the main man. The loft area of our house in Islington was mine. I transformed it into my own personal studio where I would go and spend hours playing music, mixing, singing and dancing. My twin brother Chris, goodness knows where he was; we were twins but I tell you something, I hardly knew the guy. We just went our separate ways from the beginning, occasionally we would meet at the dinner table, and it was like “Hey how you doing, who are you?”

I left secondary modern school, or maybe I should say pushed out at the age of fifteen virtually without an education. When you think that we came over when I was eight years old, not speaking a word of English, which we had to learn first, and without any extra help, it won't take much to figure out why.

My working life began as an office boy for a firm of solicitors. I realised very soon that I did not know much about anything and so I began studying at home and took on some courses at a local evening college. I spent about seven years working in offices in the Travel Industry and a further three years self-employed in Travel. I did a lot of travelling during that time, being in the business; mainly with free tickets and I count myself very fortunate for that as I got to learn a lot about the World and Life. Circumstances in later years propelled me to look for other ways to make a living, D.I.Y was always of interest to me and so, at the age of forty seven, I went back to school. I am now a fully qualified Plumber, Carpenter and a dab hand at most building skills. My last official profession was as a Building Contractor.

This July I am going to be sixty one years old going on ten! I am a health enthusiast. I gave up smoking seven years ago, I enjoy a couple of glasses of wine occasionally, I jog and swim when I have the time and still practise my Karate kicks; I earned my Black belt about five years ago. I love most music, but I tend to go for music with a kick and a big noise, as I am sure you have noticed! My philosophy in life is go with what is in your heart not what is appropriate, and certainly not what is in your pocket and laugh a lot.
I have never had any singing lessons, although I do believe that vocal training is important no matter how well you sing. I have had so much fun so far, enjoying the ride and I am certainly looking forward to what’s coming next. Singing to me means creating something tonefully beautiful that encircles the whole being, making the absurd and ridiculous obsolete and unimportant. I would like to share that.

In April 2005 I booked into a recording studio and recorded a couple of songs. For me it was for fun, to see if I could sing and what I sounded like. The response was so positive that I learnt more songs and went back and recorded another 23. Apart from the odd song which I have sung in front of a few people, I had up to now not done a live show. Instead I have concentrated on finding other songs I was interested in; listening and learning the songs for future recordings. I have also been attending the Grove Rehearsal Studios in West London regularly for 2-3 hour sessions to practise singing outside of a recording studio using a PA system.

Recording other people’s songs (cover songs) is not as rewarding as putting out original material. Nevertheless, wonderful songs such as these, sung with a fresh style can be enjoyed over and over. I am confident that if you enjoyed the originals, you will enjoy my versions. For me it’s not about making money selling cover songs; it’s practically impossible anyway once production costs, royalty payments and licence fees are settled. It’s more about playing the music and expanding on that.